Kingdom Hearts recently hit its 20-year milestone, but more importantly, Square Enix debuted Kingdom Hearts IV. The reveal trailer showcased a more realistic-looking Sora in a much different world, ushering the series into a new era. We couldn’t think of a better time to sit down with director Tetsuya Nomura and discuss the series’ evolution. He also dropped some hints about what to expect for Kingdom Hearts IV. Read on to discover the future of Final Fantasy characters, his hesitation about Sora’s appearance in Smash Bros. Ultimate, and why you shouldn’t worry about Disney’s presence in Kingdom Hearts IV.

The series recently celebrated 20 years. How does it feel to look back on the last two decades, and what do you hope Kingdom Hearts’ legacy will be?

Nomura: I feel like 20 years is a very long time, except it also doesn’t really feel that way. I have vague memories of visiting the Disney offices in the US and having meetings throughout the long history that we’ve had. But, when it comes to memories of the development and just making the actual game – it’s just kind of fuzzy. It doesn’t feel like anything has become a memory because the series is still continuing, and it’s all still in real-time. The series is always evolving; the stories are still going on. Regarding the legacy, I suppose the heart is a central theme to the story of Kingdom Hearts. We will continue to depict that and tell the story of the heart in different ways.

The series is known for its cliffhanger finales. How did you approach keeping these satisfying but still ensuring fans felt like they had some answers?

With every title, we just try to create a game that is contained within itself. There’s an actual ending in a sense to each game, which is probably something similar to any game that is made. But since the Kingdom Hearts storyline has so many mysteries and the story is ongoing, there are just so many different things that we can get into. Fans say every time they think they figure something out, there’s now a new mystery that they need to figure out.

I suppose it’s a combination of just trying to make sure that the game is contained within itself and comes to a clear stop, but then also it’s just trying to prepare a new mystery so that fans are aware of what will be important in the next title or the next part of the story that’s coming up. Personally, I feel like this approach is not really anything special, it’s something that all game developers might be considering when they make their games.

What has been your favorite cliffhanger to see fans’ reaction to?

The first thing that comes to mind is the ending for the original Kingdom Hearts. I feel like that was maybe really unexpected on the player’s part because people playing that first game probably didn’t think that the story would continue beyond that. Also in Kingdom Hearts III, when Luxu takes off their hood at the very end … I really enjoyed seeing the fans’ reactions, just because it was something that I’d really hoped for. 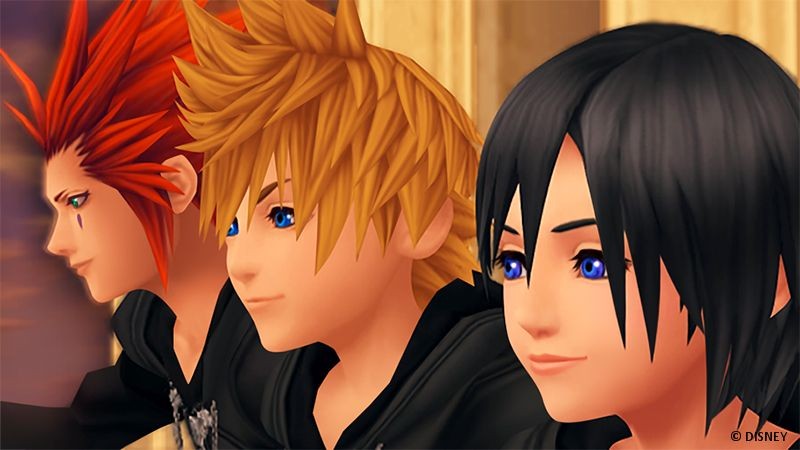 Did you expect characters from games like Birth By Sleep and Kingdom Hearts 358/2 Days to become so popular? Do you feel like their stories are complete, or we can expect more of these characters to pop up in Kingdom Hearts IV?

I really didn’t think that the characters from these two titles would become this popular. I had thought that players wanted to see more of characters like Sora or Riku. It was kind of unexpected that the characters from these two titles were so well received. As far as including them or continuing their story in Kingdom Hearts IV … The story for Kingdom Hearts IV is focused more on Sora’s disappearance. I’m not quite sure if there will be room to really explore the other characters’ stories as much, but I’m aware and the team is aware that these characters are very popular and people want to see more of them. So, if possible, it would be great to include more of them or continue to share more of their story in future opportunities.

Another area where we saw Kingdom Hearts’ popularity surge was seeing Sora in Super Smash Bros. Ultimate. Can you talk about your feelings on having Sora involved?

Obviously, I was very happy that we were able to have Sora make an appearance in Smash Bros. Ultimate. Most of the feedback when Sora was [announced] for Smash Bros. Ultimate was, ‘I can’t believe Disney okayed for him to be in this game.’ Behind the scenes, I was actually the one being very picky about his appearance in Smash Bros. Disney was the one that was like, ‘Go ahead! This is a great opportunity.’ I thought it would be tough to pull off because it might clash with the established lore in Kingdom Hearts and the Disney worlds, so it was an opportunity I had to consider very carefully. After seeing how happy everybody was in welcoming Sora to Smash Bros., I feel like the end result was really great.

Xehanort is such a memorable villain, and now we’re going into the Lost Master Arc. How do you follow that up and create fresh conflict with new adversaries?

As you mentioned, Xehanort is a really memorable character. We did take a lot of time to flesh out this enemy presence throughout the series. It all started in the original Kingdom Hearts, where there’s Ansem and Kingdom Hearts II with Xemnas – basically, these two figures that stem from one person. In the first game, we explored just the heart portion. In the second game, we explored the physical body. It all led up to the full physical embodiment of the character. I really like that we took this slow-burn approach to build up the character. I feel the presence of the enemy character is so important for them to be a really good character. It gives the story a lot of depth and density. I feel like we pulled that off.

And now we’re moving on to the next saga. In the trailer for Kingdom Hearts IV, we mentioned The Lost Master Arc. We’re going to be delving into a new enemy figure for the continuation of the story. This new enemy has a lot to do with the masked characters that appear at the end of Kingdom Hearts III. They’re going to be obstacles that stand in front of Sora. Also, in Kingdom Hearts 2.8, we showed what kind of characters they are, so the enemies have already appeared within the series. We’ll be reintroducing them, and obviously, there will be more new characters as well, but we really can’t go into detail on those characters just yet.

Do you feel it’s important to keep Sora as the main protagonist, or do you ever see the series moving beyond him?

As far as spin-offs go, we’ve had main characters that were not Sora, but in terms of the mainline series, I think Sora is actually the only real candidate for the main character. I think if Sora is no longer the main character then I would also feel like that would indicate the end to the numbered titles. He’s that important to the series. 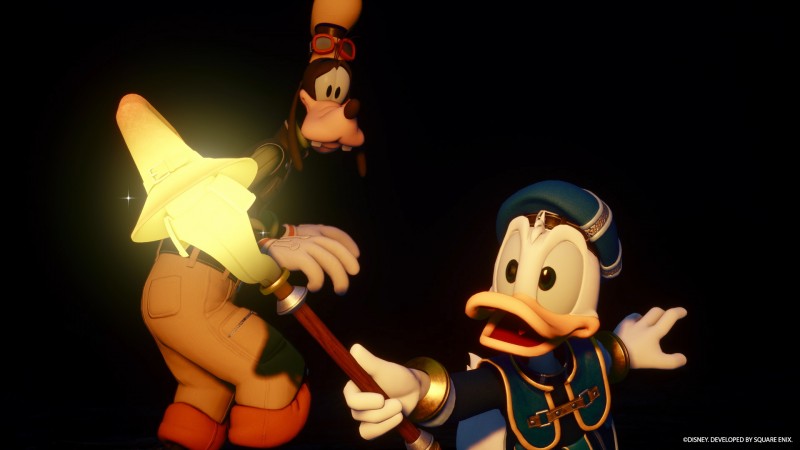 We saw Donald and Goofy in the Kingdom Hearts IV reveal, but one question a lot of fans have is how much will Disney still be integral to the series?

With regards to Kingdom Hearts IV, players are definitely going to see a few Disney worlds in there. I just want to mention that they don’t need to worry so much about this aspect of the game. It might feel slightly different from previous Kingdom Hearts titles, but once players have had a chance to play the game, I’m sure they’ll be relieved to find that it is definitely a Kingdom Hearts title. It’s the game series that they’ve come to know and love.

As far as the graphic qualities … since with each new title, the specs have been really increasing and there’s so much more we can do in terms of graphics, it kind of limits the number of worlds that we can create in a sense. At this time we’re considering how to approach that, but there will be Disney worlds in Kingdom Hearts IV.

When did you start working on ideas and planning for Kingdom Hearts IV, and what things did you know you wanted to incorporate early on?

Whenever I’m working on a title, I’m already thinking about what I want to incorporate in the next one. For example, with Kingdom Hearts IV, I had already started thinking about what I wanted to do with it while making Kingdom Hearts III. This is more in terms of characters, worlds, or gameplay systems I want to implement. Every time it’s the same process; I’m constantly thinking of what to improve or change in the next title.

For example, in Kingdom Hearts II we introduced the reaction command system. I felt like fans didn’t take to it well, and it wasn’t that popular. So in Kingdom Hearts III, we took that system out, but then fans said, ‘Why’d you take it out?’ So now we’re considering bringing it back in Kingdom Hearts IV. The challenge is with the action gameplay. It’s hard to execute the satisfying action moves when the footing isn’t very secure. That’s something we’re working on and hoping we can realize as an aspect of gameplay in Kingdom Hearts IV.

Will we be spending a lot of time in Quadratum? Does having a more realistic setting give you bigger opportunities to try new things with the gameplay?

I think it will be a pretty good amount of time since it is set as the initial base within the game. You spend time there and then go to different worlds and then go back there. Because the graphics are more realistic this time around, I feel like there’s more of a realistic daily life aspect to Sora’s life. You can see him go in and out of his room and spend time there. I feel like players will get to see more of the day-to-day routines he goes through.

As far as worlds go, in the past, we’ve featured a lot of Disney worlds and among those, the most realistic one was probably Pirates of the Caribbean. This time around we’re spending some time in the actual real world. This was a challenge we had for ourselves – just to see how realistic can we make this, and that’s something that we’re working on right now. For now, we can’t really dive into any further details than that. 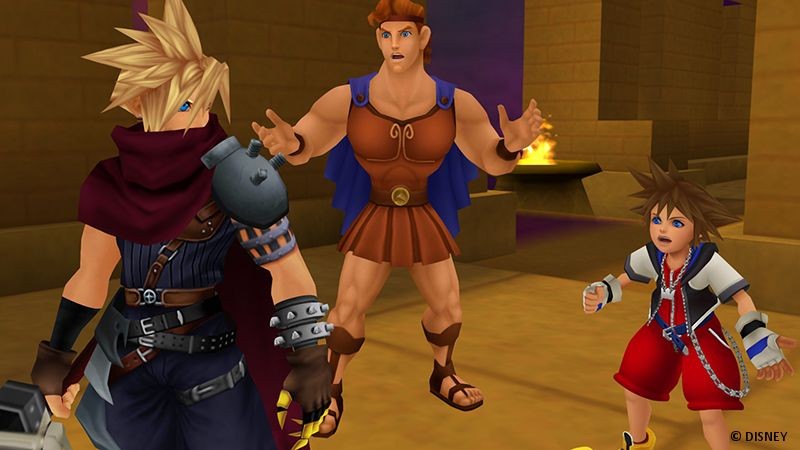 Fans have been very concerned about the lack of Final Fantasy characters in newer entries. Do you still want to dial down on the amount of them in the series, or is Kingdom Hearts IV a chance to bring in more cameos?

Do you want to give one final tease for fans about what they can look forward to?

I also wanted to mention Kingdom Hearts Missing-Link. We’re working towards launching the closed beta within the year. I know that not everybody is really into smartphone games, so some fans might not be really excited for it, but we are making it so that it’s something that anyone can jump right into. Compared to our past mobile releases, it’s a lot closer to the series and also connected in many ways to Kingdom Hearts IV.

Want more Kingdom Hearts? Read our feature on what Game Informer editors want for Kingdom Hearts IV. Also, be sure to check out our ranking of all the titles.

RPA vs. test automation: What are the differences?